"For my thoughts are not your thoughts, neither are your ways my ways, saith the Lord. For as the heavens are higher than the earth, so are my ways higher than your ways, and my thoughts than your thoughts. For as the rain cometh down, and the snow from heaven, and returneth not thither, but watereth the earth, and maketh it bring forth and bud, that it may give seed to the sower, and bread to the eater: So shall my word be that goeth forth out of my mouth: it shall not return unto me void, but it shall accomplish that which I please, and it shall prosper in the thing whereto I sent it." ~ Isaiah 55: 8-11 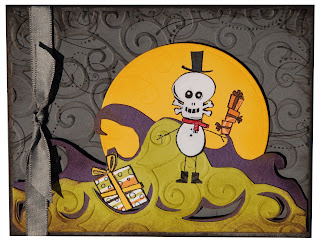 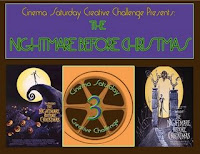 This was a first for me on many levels! A blog I follow (which is so very awesome!) done by Sankari , recently linked to a challenge blog, Cinema Saturday Creative Challenge, which she also co-hosts. I've never really done many challenges, but this one was too cool to pass up!
The site features a different challenge each week based on a movie. Last week was Breakfast at Tiffany's (which I have always really loved!), but I never found the time to do that one. This past week was A Nightmare Before Christmas, which I had never seen!
So I got to see a great movie & was greatly inspred to stamp, which is always awesome!
This card utilizes a Cuttlebug embossing folder, three Stampin' Up! sets, Batty for You, Mr. Twigster, and Sock Monkey Accessories. I used paper piecing on the presents and the skullman's scarf. The skullman's body is from Mr. Twigster, and the skull was stamped with versamark on whisper white cardstock & then heat embossed. After that cooled down, I colored over the whole image with a black stampin' write marker, then wiped over it with a napkin, to get a black outline around it.
Hope you like it!
by Arielle H Gordon at 4:33 PM 3 comments:

TrIcKs FOR YOUR TrEaTs...

You wouldn't know it from my lack of posting, but I have been stamping a lot lately! But between stamping, photographing, photoshop-ing & posting...whew~ where does the time go?!?
I have a bunch of images to post this weekend, though!

Anyways~ I had a class on Sunday afternoon with five new little stampers... they each made 25 Halloween treat bags for their classmates! They had a blast stamping & punching out & glueing... & I had a blast supervising! Here's what they made: 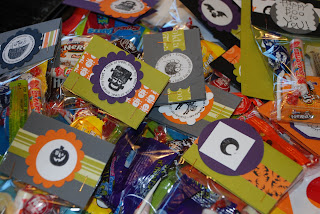 I provided the candy & supplies... these are the 3x5 cello bags from Stampin' Up!, as well as the sets Batty for You and Halloween Frights. We used 3x4 pieces of cardstock for the toppers, 3/4" inch strips of Ghostly Greetings Designer Series Paper (which I l-o-v-e!!!) and many, many punches! The kids did a great job & completed everything in record time... under 2 hours! WOW!

A LITTLE ABOUT ME...